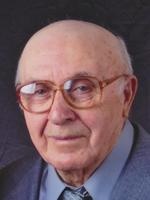 Loren C. Clark, 95, of Galesburg, IL formerly of Alexis and Viola, IL, died Sunday, November 1, 2015 at his home. Services are 10:30 a.m. Thursday November 5, 2015 at Fippinger Funeral Home in Aledo. Burial is in the Aledo Cemetery where graveside military services will be conducted. Visitation is 4-6 p.m. Wednesday at Fippingers where memorials may be left to the Viola United Methodist Church. Online condolences can be made at www.fippingerfuneralhome.com.

He was born April 28, 1920 in Smithshire, IL to Homer and Mary Cooper Clark. He graduated from Seaton High School and attended the University of Illinois. Loren married Mary E. Livingston April 18, 1942 in rural Little York, IL.

Loren was a U.S. Army veteran, having served during the Word War II. He farmed in Illinois and Iowa where Loren was active in organizations related to Angus cattle and hybrid soybean production. He was later employed in agricultural sales and office equipment repair. He owned and operated LORCO Water Conditioning for forty years, serving customers throughout western Illinois.

Those left to share memories and funny stories about his life include his wife, Mary; three daughters, Grace Johnson (Jim Pransky) of Davenport, Iowa; Nancy (Bob) Dillard of Galesburg, IL; Donna (Son) Truong of Long Beach, CA; one son, James Clark (Terri Clemens) of Chicago, IL and daughter-in-law, Etta Clark of Humble, TX. There are 8 grandchildren; 4 great grandchildren and 2 great great grandchildren. Also surviving are sister, Esther (Lossee) Morford of Taylor Ridge, IL; several cousins, and many nieces and nephews. He will be missed by his friends at the Kensington Apartments.

Those having passed before include his parents; son Lawrence; grandson, Christopher; and his brother, Marvin.


American Legion
United Methodist Church
US Army
The insignias listed here may be subject to copyright and / or trademarked. Those copyrights and trademarks are owned by the respective organizations.

To send flowers to the family in memory of Loren Clark, please visit our flower store.