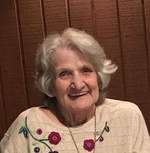 Lois E. Krueger, 84, of Aledo, IL, died Friday, July 22, 2016 at Genesis Senior Living in Aledo. Services will be 10:00 a.m., Tuesday, July 26, 2016 at Fippinger Funeral Home in Aledo. Burial is in the Aledo Cemetery. Visitation will be 5-7 p.m. Monday at Fippinger's where memorials may be left to the Quad Cities Walk to Emmaus and online condolences may be left at www.fippingerfuneralhome.com.

She was a homemaker.

She was a member of the New Life Assembly of God in Aledo. Lois enjoyed knitting, crocheting and sewing especially for area residents.

She was preceded in death by her parents; husband; three sisters; three brothers; and one son, Tom.

To send flowers to the family in memory of Lois Krueger, please visit our flower store.