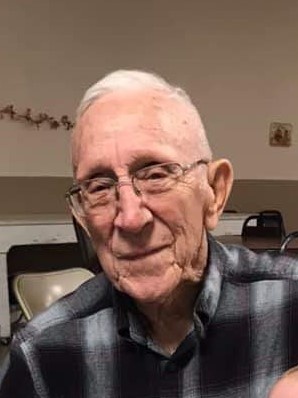 Lewis M. “Corky” Mosher, age 90, of New Boston, IL. Died Tuesday December 8, 2020 at Brookstone in Aledo.  Private Burial  will be Friday December 11, 2020 in The New Boston Cemetery.  There is no visitation.  Memorials may be left to the New Boston Fire Department or the Fur-Ever Friends of Mercer County.  Fippinger Funeral Home in Aledo is in charge of arrangements and online condolences can be made at fippingerfuneralhome.com.

He was born September 17, 1930 in New Boston, IL to Oscar and Helen Brown Mosher.  He attended the local schools and was happily married to the love of his life Audrey Mae Miller December 22, 1949 in Aledo.  She died in 2008.  He then married Janet Harris Hainline April 20, 2010 in Aledo.

Corky was a 50 year member of Midwest Operating Engineers as a crane operator and various other machines.

He enjoyed fishing, golfing, helping his community and especially loved his family and friends.  On his 90th birthday he was grateful to have 90 years of good health and happiness.

He was preceded in death by his parents and is happily reunited with his wife.

To send flowers to the family in memory of Lewis Mosher, please visit our flower store.
Open