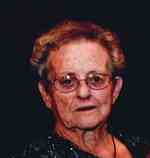 Laura "Jean" McAlister, 88, of Aledo, Ilinois, died Wednesday, December 18, 2013 at Genesis Medical Center in Aledo. Services are 1:30 p.m. Monday, December 23, 2013 at the Fippinger Funeral Home in Aledo. Burial is in the Aledo Cemetery. Visitation is noon until the time of service Monday at Fippinger's where memorials may be left to the American Cancer Society or the American Heart Association. Online condolences can be made at www.fippingerfuneralhome.com.

She was born May 2, 1925 in Thomas, Oklahoma to Oscar and Bessie Handly Hulme. She graduated from Thomas High School. Jean married Jerry McAlister January 21, 1945 in Reno, Nevada.

Jean was a homemaker and a member of the former neighborhood club. She enjoyed painting on canvas, sewing, quilting, crocheting, gardening, canning and baking. She loved being a farmwife.

Her parents; one grandson: Michael; and one sister preceded her in death.

Christian Cross
The insignias listed here may be subject to copyright and / or trademarked. Those copyrights and trademarks are owned by the respective organizations.

To send flowers to the family in memory of Laura McAlister, please visit our flower store.