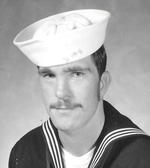 Larry D. Loving, 66, of Alpha, Illinois died Friday January 29, 2016 at home. Private graveside and military services will be Tuesday February 2, 2016 at the Calvary Lutheran Cemetery in New Windsor, IL. Visitation is from 5 - 7 PM Monday at Peterson Wallin Knox Funeral Home in Alpha where a memorial fund will be established. Online condolences can be made at www.petersonwallinknox.com.

He was born May 21, 1949 in Aledo, Illinois to Roy and Dessal Harter Loving. He was raised by his mother and step-father Warren Vance and attended the Aledo schools.

He was a U.S. Navy Veteran Sea Bee serving in the Vietnam War.

Larry worked at International Harvester and was a truck driver for many years. He retired as a Truss assembler at Kone in Moline in 2011. He enjoyed fishing and country and bluegrass music.

His parents and a brother Richard preceded him in death.


United States Navy Sea Bee's
The insignias listed here may be subject to copyright and / or trademarked. Those copyrights and trademarks are owned by the respective organizations.

To send flowers to the family in memory of Larry Loving, please visit our flower store.