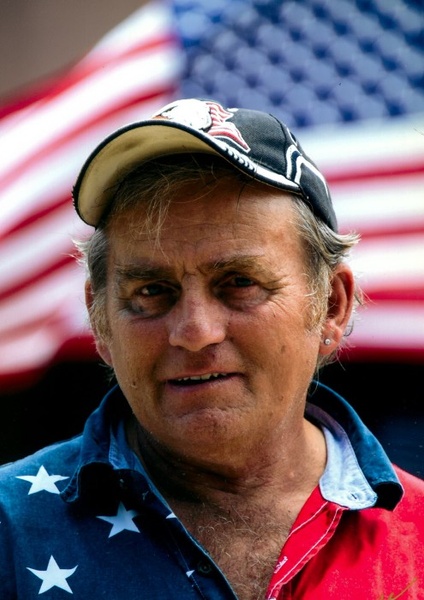 Larry D. Eckhardt, 63 of Little York, IL died Tuesday, March 31, 2020 at his home.  Visitation will be held Saturday, April 4, 2020 from 1:00 PM to 7:00 PM at the Fippinger Funeral Home in Aledo, Illinois. In keeping with the CDC’s Covid-19 social restrictions, all social distancing practices will be observed.    A celebration of life will be held at a later date when the restrictions are lifted.  Memorial contributions may be left to the “Larry Eckhardt Memorial Fund”.  Online condolences can be made at www.fippingerfuneralhome.com.

He was born August 25, 1956 in Monmouth, IL to Lee Ray and Iris Marie Hanley Eckhardt.  Larry graduated from Aledo High School in 1974 and attended Blackhawk College for two years.

He served in the United States Marine Corp reserves.

He was employed at International Harvester as a machinist for 25 years.

Larry began his journey as “The Flag Man” 15 years ago when he attended the funeral of a fallen soldier and noticed there were no American flags to honor the man whom he considered a hero.  So began his journey as “Larry The Flag Man” to insure that fallen soldiers and first responders were given the respect they deserved from a grateful nation.   He started with 50 flags, which multiplied into a force of volunteers across 14 states.

Larry received the DAR Medal of Honor in 2011, was named Honorary Member of the Kentucky Colonels in 2013 and received the Judah P. Benjamin award from the Daughters of the Confederacy in 2013.  On June 14, 2012 Illinois Governor Pat Quinn declared that day as Larry “The Flag Man” Eckhardt Day in Illinois in honor of his service to our veterans

He was preceded in death by his parents; his step-mother: Mary Thomas and is survived by a very special friend, confident and caretaker: Angela Soule of Little York, IL.

To send flowers to the family in memory of Larry Eckhardt, please visit our flower store.
Open