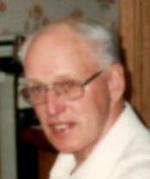 Kenneth L. Hughes, 90, of New Windsor, IL, died Tuesday, December 4, 2012 at the Mercer County Nursing Home in Aledo. Graveside services are 2 p.m., Saturday, December 8, 2012 at Calvary Lutheran Cemetery in New Windsor. Visitation is 4-7 p.m., Friday at Peterson-Wallin-Knox Funeral Home in Alpha where memorials may be left to the American Red Cross or the New Kingdom Trailriders. Online condolences can be made at www.petersonwallinknox.com.

He was born April 19, 1922 in Griffin, IL to Roy and Ada Young Hughes. He attended the local schools and married Colleen Lynn December 30, 1944 in New Windsor, IL.

He enjoyed reading and trail riding.

His parents; two sisters: Donna Bollbach and Laurel Lindgren preceded him in death.


Farm Bureau
Lutheran Church
The insignias listed here may be subject to copyright and / or trademarked. Those copyrights and trademarks are owned by the respective organizations.

To send flowers to the family in memory of Kenneth Hughes, please visit our flower store.