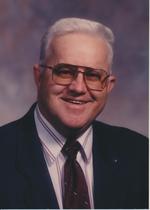 Kenneth L. Crutcher, 69, of Aledo, formerly of Joy, IL, died Wednesday, January 7, 2015 at home after a lengthy battle with pulmonary fibrosis. Services are 10 a.m. Monday, January 12, 2015 at Fippinger Funeral Home in Aledo. Burial is in the Leech Cemetery, rural Joy. Visitation is from 2-5 p.m. Sunday at Fippinger's where memorials may be left to Aledo First Baptist Church or the Eliza American Legion Post 1971. Online condolences can be made at www.fippingerfuneralhome.com.

Kenny was employed by John Deere Seeding Division in Moline as a tool and die maker until going to serve his country in the U.S. Marine Corp. in 1965. After completing his tour of duty, he returned to John Deere, retiring after 30 years in 1995.

Kenny was a member of the First Baptist Church in Aledo and the Eliza American Legion Post 1971. He enjoyed spending time with his family, going on mission trips, building homes, cabinets and other furniture, spending time at his cabin at Lake Odessa and raising fowl and small animals. He also hosted the annual fall weiner roast for many years at his homeplace in Joy which was attended by friends and family.

Kenny was preceded in death by his parents; three sisters: Katherine Strosahl, Shirley Kuchenmeister and Dollie Gobble; a brother, Denzil and an infant brother, Charles.


American Legion
Baptist Church
John Deere
US Marine Corps
The insignias listed here may be subject to copyright and / or trademarked. Those copyrights and trademarks are owned by the respective organizations.

To send flowers to the family in memory of Kenneth Crutcher, please visit our flower store.