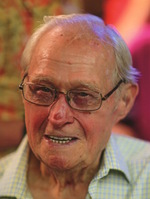 Kenneth J. "Bake" Barton, 88, of Alpha, Illinois went to be with the Lord Tuesday, November 25, 2014 surrounded by his family at home. Services are 11:00 a.m. Saturday, November 29, 2014 at Peterson-Wallin-Knox Funeral Home in Alpha. Burial is in the Alpha Cemetery where military rites will be conducted. Visitation is 4-7 p.m. Friday at the funeral home. In lieu of flowers, memorials may be made to the Oxford American Legion Post #1197, Alpha Baptist Church or Alpha Cemetery Association. Online condolences can be made at www.petersonwallinknox.com.

Bake was born May 19, 1926 in Ophiem, Illinois to Clyde and Edith Wittenmeyer Barton. In his senior year at Alpha High School, he was drafted into the U.S. Army where he served in the Philippines. After World War II, he was employed as a foreman and lineman for the Illinois Power Company from 1948 until retiring in 1985. He also worked part-time at Tony's Plumbing and Heating in Alpha for many years. He married Marilyn Bridgford on January 6, 1952 in Aledo, Illinois.

He was a member of the Alpha Baptist Church, charter member of the Oxford American Legion Post #1197 where he served as commander and was instrumental in building the Alpha legion building. He helped establish the Alpha Baseball Association and volunteered extensively in the Alpha area. Bake and Marilyn enjoyed traveling in their motor home. His many interests included: oil painting, working outdoors and using his creative skills. He especially enjoyed spending time with his family and friends. He was extremely proud of his grandchildren and followed their many activities. Friday night "Happy Hours" were legendary.

He was preceded in death by his parents; one granddaughter, Hope; two sisters; five brothers.

He was a wonderful husband, father and grandfather. He will be sadly missed. Bake, we love you and may you rest in peace til we meet again.

To send flowers to the family in memory of Kenneth Barton, please visit our flower store.