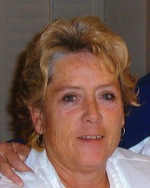 Kelly J. Rogers, 55, of New Windsor, IL died Saturday, November 15, 2014 at home. Services are 11 a.m. Saturday, November 22, 2014 at Peterson-Wallin-Knox funeral Home in Alpha. Burial will be at a later date. Visitation is one hour prior to services at the funeral home where memorials may be left to Genesis Hospice or Rock Island County Area Project. Online condolences can be made at www.petersonwallinknox.com.

She was born April 10, 1959 in Moline, IL to Robert and Patricia Paden Rogers. She graduated from Geneseo High School in 1977.

Kelly was employed as a program coordinator at Rock Island County Area Project for 28 years.

She enjoyed rubber stamping, camping, riding and spending time with her mules. She won several awards and ribbons at the New Windsor Fair and Rodeo for her flowers.

She was preceded in death by her mother, two brothers, Robert Paul and James Eugene.

To send flowers to the family in memory of Kelly Rogers, please visit our flower store.