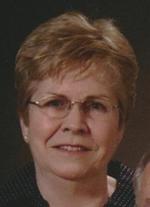 Juli A. "Judy" Pitman, 69, of Matherville, IL died Saturday, March 14, 2015 at Unity Point-Health in Rock Island. Mass of Christian Burial is 10 a.m. Wednesday, March 18, 2015 at St. Anthony's Catholic Church in Matherville. Burial is in the St. John's Catholic Cemetery in Viola. Visitation is 5-7 p.m. Tuesday at Fippinger Funeral Home in Aledo where a rosary will be recited at 7:30 p.m. Memorials may be left to St. Anthony's Catholic Church or the Juvenile Diabetes Association and online condolences can be made at www.fippingerfuneralhome.com.

She was born November 2, 1945 in Rock Island, IL to James and Ella David Redpath. She graduated from Sherrard High School. On June 6, 1964, she was united in marriage to Donald Pitman in Matherville.

Juli was a member of St. Anthony's Catholic Church. She was employed as a customer service representative at Modern Woodmen of America for many years, retiring in 2009. Juli enjoyed decorating the house, especially for holidays, gardening and flowers.

She was preceded in death by her parents, one daughter, Jolene Pitman; one brother, Ronald Redpath, one sister, Marjorie Mapes.

To send flowers to the family in memory of Juli Pitman, please visit our flower store.