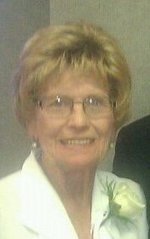 Judith A. Newton, 75, of Aledo, IL, died Friday, June 28, 2013 at Aledo Health and Rehabilitation. Funeral services will be 10:30 a.m., Tuesday, July 2, 2013 at Fippinger Funeral Home in Aledo. Burial is in the Aledo Cemetery. Visitation is from 5-8 p.m. Monday at Fippinger's where Mercer County VFW Post 1571 Auxiliary will conduct services at 8 p.m. Memorials may be left to the St. Jude's Children's Research Hospital or Juvenile Diabetes Research Foundation. Online condolences can be made at www.fippingerfuneralhome.com.

Judy was born April 12, 1938 in Aledo to Harlan and Dorothy Wood Johnson. She graduated from Aledo High School in 1956 and married James Bridgford. She later married Delbert Max Newton January 4, 1975 in Aledo. He died October 30, 1987.

She was employed for many years at Quinn's Grocery Store and Alliance Plumbing and Heating both in Aledo. Most recently she was employed at the Aledo Hardware Store and Doug's Town and Country Restaurant.

Her memberships include the Hawthorne Ridge Golf Club, Mercer County VFW Post 1571 Auxiliary and the Domino Club. She enjoyed golfing, bowling, shopping, playing cards and going to the casino.

Her parents, son-in-law, Jeff Reynolds and a sister, Connie preceded her in death.


VFW Auxiliary
The insignias listed here may be subject to copyright and / or trademarked. Those copyrights and trademarks are owned by the respective organizations.

To send flowers to the family in memory of Judith Newton, please visit our flower store.