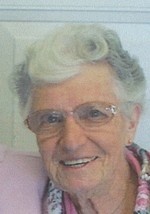 Josephine M. GoSline, 95 of Aledo died Tuesday, March 29, 2016 at Brookstone in Aledo. Mass of Christian Burial will be 2:00 p.m. Friday, April 1, 2016 at St. John's Catholic Church in Viola. Burial is in the Calvary Cemetery in Rock Island. Visitation is one hour prior to services at the church where memorials may be left to St. John's Building Fund, Brookstone or Hospice Compassus. Fippinger Funeral Home is in charge of arrangements and online condolences can be made at www.fippingerfuneralhome.com.

Jo was an active person. At Age 11 she was a newspaper carrier for the Rock Island Argus. During later years, she enjoyed bowling. dancing at the Col Ballroom and working with her husband "Gib" in his business; "Gib's Marine Sales " on the Rock River Bank edge of Black Hawk State Park and Cotton Mill Building. After retirement she enjoyed gardening, making greeting cards, quilting, stamp collecting and mostly enjoyed her family. She Always kept busy.

She was preceded in death by her parents, husband and 3 brothers.

To send flowers to the family in memory of Josephine GoSline, please visit our flower store.