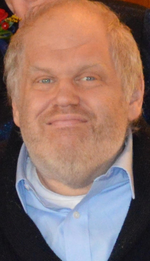 Jon R. Grapengeter, 42, of Davenport, Iowa died Tuesday, June 14, 2016 at Genesis East Medical Center in Davenport, Iowa. Graveside services are 1:30 p.m. Saturday, June 18, 2016 at the Aledo Cemetery. Visitation is one hour prior to services at Fippinger Funeral Home in Aledo. A memorial fund will be established and online condolences can be made at www.fippingerfuneralhome.com.

He was born May 16, 1974 in Davenport, Iowa to Dan and Linda McKay Grapengeter. He graduated from Davenport Central High School in 1992. He never married.

Jon was employed as a janitor for Professional Building Services in Davenport. He was a member of the Community of Christ. Jon loved sports and was an avid Chicago sports fan.

To send flowers to the family in memory of Jon Grapengeter, please visit our flower store.