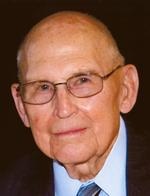 John L. Welch, 90, of Aledo, IL, died Friday, September 28, 2012 at Mercer County Nursing Home in Aledo. Mass of the Christian Burial is 10:30 a.m., Tuesday, October 2, 2012 at St. Catherine's Catholic Church. Burial is in St. John's Catholic Cemetery in Viola where graveside military services will be conducted. Visitation is Monday at Fippinger Funeral Home from 4-8 p.m. where a rosary will be recited at 8 p.m. In lieu of flowers, memorials may be left to St. Catherine's Catholic Church or the Bernard van der Steen Cancer Patient Assistance Fund at the Mayo Clinic. Online condolences can be made at www.fippingerfuneralhome.com.

He was born February 13, 1922 in Henderson County, IL to John and Eliza Beard Welch. He attended St. Joseph's School in Rock Island and married Jean F. Bates May 17, 1947 in East Moline, IL.

John was a WWII United States Army veteran, serving in the Asiatic Theater from 1943 until 1945. He was employed as an electrician at Farmall in Rock Island for 33 years, retiring in 1974. He farmed southwest of Viola, near Gilchrist, from 1956 until his retirement in 1980 where he especially enjoyed raising livestock. He moved to Aledo in 1983.

He was a member of St. Catherine's Catholic Church; a lifetime member of both the Knights of Columbus and the American Legion Fallerans Post 121. He enjoyed attending auctions, collecting tools and pocketknives, and especially enjoyed his grandchildren and their activities.

John was preceded in death by his parents; two children: Deborah Anne and Mary Patricia; one brother: Lytle; and a daughter-in-law: Marlene.

The family would especially like to thank Dr. Benjamin Shnurman, the Genesis Hospice Visiting Nurses Association, the Clarissa Cook Hospice and the Mercer County Nursing Home.

To send flowers to the family in memory of John Welch, please visit our flower store.