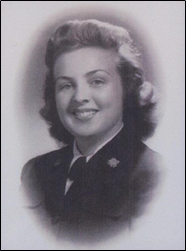 She was born on November 1, 1922 in New Boston, to Craig and Elfa Essley. She went to high school in Aledo, attended MacMurray College, then graduated from the University of Iowa.

Upon graduation from Iowa, Jo enlisted in the Coast Guard in 1944. She was trained in Morse code, for which she later used in air and sea rescue operations off the coast of southern California. She received the American Campaign Medal and the World War II Victory Medal. Later, Jo enlisted in the Navy Reserves during the Korean conflict, serving three years in a reserve aviation squadron. She was the oldest living World War II veteran in Mercer county.

Jo married David G. Lawson in Aledo on May 13, 1950. They were married 65 years, upon the passing of her husband in 2015. She and Dave lived on the family Centennial farm located on the northeast edge of Aledo. She was a school teacher teaching four years at Perryton elementary and nine years at Northside middle school.

Jo and Dave travelled extensively covering all 50 states, all provinces of Canada and the Yukon Territory, where they canoed the Yukon river. They visited many foreign countries often travelling by military air.

Jo was an early advocate of conservation efforts, supporting the Nature Conservancy, Illinois Acres for Wildlife, and early recycling efforts in Mercer County. She helped start the Aledo food pantry. She was a member of P.E.O. and the Aledo United Methodist Church.

Because Jo was always upbeat and looked at life positively, almost anyone that knew her never had the feeling she was old. She was a 4’ 10” dynamo that was truly 98 years young!

She is survived by her sons, Roger (Jan) Lawson, Dan (Marybeth) Lawson, and a daughter, Lindee (Jeff) Kent. She is also survived by four grandchildren, and one great grand child. A daughter, Merridee is deceased.

The family wishes to express their gratitude to the staff at the Genesis Medical centers in Aledo and East Davenport for their kind and compassionate care for Jo in her final days.

Cremation has been accorded. Due to recent serious spiking of Covid-19 and concern for the safety and well being of others, a celebration of life and private burial is planned for a later date. Memorials can be made to the Aledo Cemetery Fund; 120 N. College Ave; Aledo, IL 61231.  Fippinger Funeral Home in Aledo is in charge of arrangements and Online condolences can be made online at www.fippingerfuneralhome.com.

To send flowers to the family in memory of Joan Lawson, please visit our flower store.