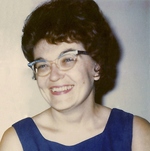 Jo Ann E. Kelly of Woodhull, IL, passed away peacefully on August 9, 2015 at the age of 86. For the last two years she stayed at Seminary Manor in Galesburg, IL in the excellent care of the wonderful people that work there.
Services are at Peterson-Wallin-Knox Funeral Home in Woodhull, IL on Friday August 14 at 11:00 AM; burial will be at a later date in the Alpha Cemetery. Visitation is one hour prior to the service at the funeral home, where memorials may be left to Clover Township Public Library. Online condolences may be made at www.petersonwallinknox.com.

Jo Ann was born July 2, 1929 in Moline, IL - a daughter of Cecil and Georgia Jackson Stone. She graduated from Hammond Technical College in Hammond, IN and married Ralph Kelly in Moline, IL for 18 years. Later she was married for eight years to Theo Gailey in Palm Springs, CA.

She was a homemaker and later employed as a desk clerk and switchboard operator in the hotel industry. Jo Ann was proud to be a member of the United Church of Woodhull. A great lover of music, she also was an avid reader and even when her eyesight failed she continued to listen to spoken books.

To send flowers to the family in memory of Jo Kelly, please visit our flower store.