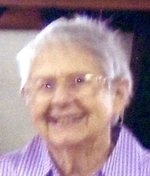 Jeannette L. Medley, 86, of Cambridge, formerly of Woodhull, Illinois, died Monday, January 21, 2013 at Cottage Hospital in Galesburg. Services are 1:30 p.m., Thursday, January 24, 2013 at Peterson-Wallin-Knox Funeral Home in Woodhull. Burial will be in the Woodhull Cemetery. Visitation is 5-7 p.m., Wednesday at Peterson-Wallin-Knox in Woodhull. Memorials may be made to United Church of Woodhull. Online condolences can be made at www.petersonwallinknox.com.

Jeannette was born May 24, 1926 in Osco, Illinois, a daughter of Ernest and Emma Fredell Steffen. She graduated from Orion High School and attended AIC in Davenport. She married Marvin J. Medley March 17, 1947 in Geneseo. He died December 22, 2011.

She was a homemaker and cleaned area homes and worked at AlWood High School cafeteria. She was a member of the United Church of Woodhull and the Miles S. Sturgeon American Legion Auxiliary. She enjoyed doing puzzles.

She was preceded in death by her parents, her husband: Marvin, six brothers and one sister.

To send flowers to the family in memory of Jeannette Medley, please visit our flower store.