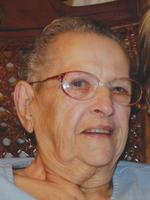 Jean A. Easley, 87, of Aledo died Friday, October 9, 2015 at home. Services are 1:30 p.m. Monday, October 12, 2015 at Fippinger Funeral Home in Aledo. Burial is in the New Boston Cemetery. Visitation is noon until the time of services at Fippinger's where memorials may be left to the American Diabetes Association. Online condolences can be made at www.fippingerfuneralhome.com.

She was born March 10, 1928 in Springfield, IL to Clement and Minnie Dutz Ward. She attended the local Springfield schools and married Charles W. Easley Jr. October 26, 1946 in Springfield. He died in 2004.

Jean was employed briefly at St. Anthony's Hospital in Rock Island and was a homemaker. She enjoyed embroidery, reading, writing to pen pals, and long visits with her family.

She was preceded in death by her parents, husband, an infant son, Donald, 2 daughters, Eleanor Hunt, Karen Schmidt, 3 grandchildren, 6 sisters and a brother.

To send flowers to the family in memory of Jean Easley, please visit our flower store.