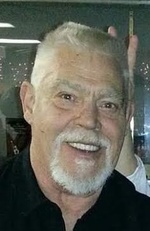 James L. Walker Sr., 72, of Rio, IL died Wednesday, October 12, 2016 at home. Cremation has been accorded. Memorial services are 11:00 a.m. Saturday, October 15, 2016 at Peterson-Wallin-Knox Funeral Home in Alpha. Private burial will be at a later date. Friends may greet the family from 9-11 a.m. prior to services at the funeral home. Memorials may be made to the Oxford American Legion Post 1197 and online condolences can be made at www.petersonwallinknox.com.

He was employed at Deere and Company for over twenty years and owned Walker’s Garage in Alpha. Jim was a “jack of all trades”.

Jim was a member of the American Legion and the Central Illinois ABATE.

Of his many interests and passions which included building and racing stock cars (#87) and his Harley Davidson, the love of his life was his wife, children, grandchildren and great grandchildren.

His parents, one son, James Jr., one grandson, one great granddaughter and two brothers, Fred and John preceded him in death.

To send flowers to the family in memory of James Walker Sr., please visit our flower store.