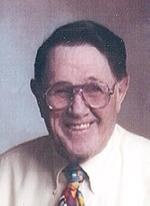 James S. Glenn, 85, of Aledo, IL died Monday, March 5, 2012 at Mercer County Hospital. Services are 10:00 AM Friday, March 9, 2012 at the Fippinger Funeral Home in Aledo, IL. Burial is in the National Cemetery, Rock Island Arsenal where graveside Military services will be conducted. Visitation is 4-7 PM Thursday at Fippingers. Memorials may be left to American Legion Fallerans Post 121 in Aledo. On-line condolences can be made at www.fippingerfuneralhome.com.

He was born September 8, 1926 in Sparta, IL a son of William and Della Myers Glenn. He graduated from Sparta High School and married Patsy J. Lindsay February 15, 1951 in Sparta, IL.

He was a United States Army veteran of World War II. He farmed for many years and was employed by Missouri Pacific Railroad.

He was a member of the Aledo United Methodist Church where he sang in the choir and the American Legion Fallerans Post 121.

He enjoyed sports, was an avid Cubs and Bears fan and for many years coached baseball.

He was preceded in death by his parents, two sons, David and Gerald, seven sisters and 3 brothers.


Army
Army
Asiatic Pacific Theater Campaign Ribbon
Good Conduct Medal
WWII Victory Medal
The insignias listed here may be subject to copyright and / or trademarked. Those copyrights and trademarks are owned by the respective organizations.

To send flowers to the family in memory of James Glenn, please visit our flower store.