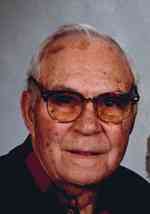 James C. "Cap" Fair, 95, of Seaton, IL, died Thursday, February 14, 2013. Masonic services are 11 a.m., Monday, February 18, 2013 with funeral services immediately following at Fippinger Funeral Home in Aledo. Burial is in the Candor Cemetery, rural Seaton. Visitation is 10 a.m. until the time of services Monday at Fippinger's where a memorial fund will be established. On-line condolences can be made at www.fippingerfuneralhome.com.

He was born November 22, 1917 in rural Princeton, Missouri to James and Lola Watson Fair. He attended the local schools and married T. Louise Rockhold November 19, 1942 in Trenton, MO. She died in 2007.

James was a U.S. Army veteran of WWII, serving in the South Pacific. He was employed at International Harvester in East Moline, retiring in 1974.

He was a former Seaton volunteer fireman and Seaton Village Board member. He was a member of the Aledo Masonic Lodge # 252 AF & AM and the Mercer County VFW Post #1571. He enjoyed traveling, camping, fishing and being with "Daisy", his dog.

He is survived by one daughter: Susan (David) Ford of Seaton; IL; 1 son: Bill (Donna) Fair of Viola; 4 grandchildren, 9 great grandchildren; one brother: Glen Fair of Orion, IL; and a sister-in-law: Jeannine Fair of Clinton, MO.

He was preceded in death by his parents; wife; one grandson: Eric; two brothers: O.D. and Herb; and a sister-in-law: Carolyn.

To send flowers to the family in memory of James Fair, please visit our flower store.