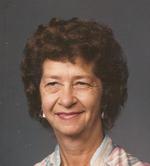 Jacil D. Ham, 80, of Aledo, IL, died Sunday, December 9, 2012 at the Mercer County Nursing Home. Cremation has been accorded. Visitation is 4-7 p.m., Wednesday, December 12, 2012 at Fippinger Funeral Home in Aledo where memorials may be left to the Mercer County Animal Shelter or March of Dimes. Private burial will be at a later date in Tulsa, Oklahoma. Online condolences can be made at www.fippingerfuneralhome.com.

Jacil was a waitress in the Aledo area for many years and was employed as a nurse's aide at the Mercer County Nursing Home, retiring in 1996. She enjoyed riding motorcycles, gardening, cross-stitching and playing softball in her younger days.

She was preceded in death by her parents; three sons; one daughter; one grandchild; three sisters; and one brother.

To send flowers to the family in memory of Jacil Ham, please visit our flower store.