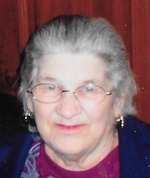 H. "Ruth" Kerner, 82, of Alpha, Illinois died Saturday, April 19, 2015 at Rosewood Care Center in Galesburg. Services are 10:30 AM Thursday April 23, 2015 at Peterson-Wallin-Knox Funeral Home in Alpha. Burial is in the Pleasant View Cemetery in Kewanee. Visitation is from 5-7 PM Wednesday at the funeral home where a memorial fund will be established. Online condolences can be made at www.petersonwallinknox.com.

She was born November 4, 1932 in rural Kewanee, IL to Charles and Helen White Stone. Ruth attended the Kewanee schools. On August 12, 1950, she married Louis M. Kerner in Galva, IL.

Ruth was a homemaker. Prior to her marriage, she was employed at People's Cleaners and the Boss Factory in Kewanee.

She was a former member of the Kewanee Hospital Auxiliary and enjoyed quilting, crocheting, embroidery and especially being with her family.

Her parents, one daughter, Doreen, one son, Virgil and two brothers preceded her in death.

To send flowers to the family in memory of Helen Kerner, please visit our flower store.