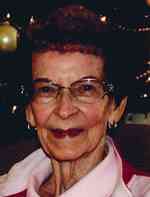 Harriette E. Kuehl, 90, of Aledo, Illinois, formerly of Rock Island, died Friday, February 6, 2015 at Genesis Senior Living Center in Aledo. Cremation has been accorded. Graveside services are 11:00 a.m. Saturday, February 21, 2015 at the Aledo Cemetery. There is no visitation and memorials in her name may be sent to the donor's favorite charity. Fippinger Funeral Home is in charge of arrangements and online condolences can be made at www.fippingerfuneralhome.com.

Harriette was born February 1, 1925 in Joy, Illinois to Earl and Gladys Crapnell Dodson. She graduated from the former Joy High School in 1943. She married Elmer F. Kuehl January 22, 1944 in Joy, Illinois. He preceded her in death October 21, 2010.

She was employed at THE Rock Island Bank, retiring in 1976. Harriette and Elmer moved to Walker, Minnesota and later to Leesburg, Florida.

She is survived by her nephew, Dennis (Trudy) Litwiler of Aledo.

She was preceded in death by her parents, husband, one sister, Marie A. Duncan, four brothers: Donovan, Wayne, Leo and Everette Dodson.

To send flowers to the family in memory of Harriette Kuehl, please visit our flower store.