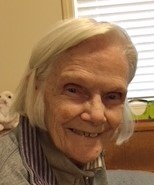 Harriett E. Pattison, 92 of Monmouth, IL died Friday, September 21, 2018 at Aledo Health and Rehab. Services are 11:30 a.m. Tuesday September 25, 2018 at Fippinger Funeral Home in Aledo. Burial is in the Aledo Cemetery. Visitation is 10:00 a.m. until the time of services at Fippinger’s where memorials may be left to Hospice Compassus or Courtyard Estates of Monmouth. Online condolences may be left at www.fippingerfuneralhome.com.

Harriett was born February 9, 1926 in Monmouth, IL to Fred and Minnie Anderson Murphy. She attended Monmouth schools. Harriett was united in marriage to Donald E. Pattison October 27, 1943. He died in 1966.

She was a homemaker and a professional grandma! Harriett enjoyed playing games, baking, crocheting, quilting, making dolls and doll clothes for the grandkids. Harriett also enjoyed caring for her yard and flower garden.

She was preceded in death by her parents; her husband; 4 sisters; and 5 brothers.

To send flowers to the family in memory of Harriett Pattison, please visit our flower store.
Open