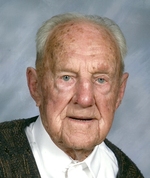 Glenn F. Brown, 105, of Viola, IL, one of Mercer County's oldest and most recognized citizens, passed away Saturday, September 21, 2013 at Heartland Health Care Center, Moline, after a six weeks illness. Mass of Christian Burial is 10:30 a.m., Wednesday, September 25, 2013 at St. Catherine's Catholic Church in Aledo. Burial is in the Aledo Cemetery. Visitation is 4-7 p.m. Tuesday at Fippinger Funeral Home in Aledo where a rosary will be recited at 7 p.m. Memorials may be made to the Viola Public Library, St. John's Catholic Church, or St. Ambrose University Scholarship Fund. Online condolences may be made at www.fippingerfuneralhome.com.

Glenn was born at the family home in Old Gilchrist May 19, 1908, the son of John and Selma Anderson Brown. Upon graduating from Viola High School, he enrolled and graduated from St. Ambrose University with the class of 1929, and up until his death, was the oldest living graduate of St. Ambrose. A classmate he had befriended helped him get a job with Goodyear, which ultimately lead him to Chicago, where he married Erna Kunstmann November 17, 1934. She died April 19, 1996.

He returned with his family to Mercer County in 1942 to a family farm, and later became the owner of Viola Auction Co. He often said there probably wasn't a farm kitchen for miles around that he hadn't had coffee in. He temporarily retired after selling the business in the 1960's, only to become involved in raising and racing standardbred horses with his son, Terry. He enjoyed naming his race horses after grandchildren.
Glenn's young ambition was to play major league baseball. He never achieved that goal, but he enjoyed watching the Chicago White Sox all his life and was always recognizable with the Sox cap on his head.

His age and personality made him a semi-celebrity with a number of appearances on local television and newspapers, honored at the Illinois State Fair harness races, and capped by being interviewed by every Chicago television station on Opening Day 2012 with the White Sox.
He was a member of St. John's Catholic Church in Viola.

He was preceded in death by his parents; wife, Erna; son, Terry; daughter, Judy Fisher; and two grandchildren, Joy and Kevin Brown.

To send flowers to the family in memory of Glenn Brown, please visit our flower store.