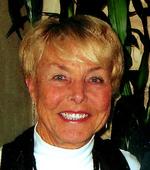 Geraldine L. "Jerrie" Robinson, 77, of Bettendorf, IA, formerly of Woodhull, IL, died Friday, May 17, 2013 at Trinity Medical Center in Bettendorf. Services are 11 a.m., Wednesday, May 22, 2013 at the United Church of Woodhull. Private burial is at a later date in the National Cemetery, Rock Island Arsenal. Visitation is 9 a.m. until time of services Wednesday at the church where memorials may be left to the American Cancer Society. Online condolences can be made at www.petersonwallinknox.com.

Prior to her marriage, she was employed as a professional secretary in the Quad City area. For many years, Jerrie enjoyed home and professional decorating and was a talented seamstress sewing beautiful draperies and her niece's wedding gown. Jerrie was an avid sports fan and particularly enjoyed watching the Illini. She was devoted to her family and friends and cherished spending time with them. She never missed attending her children's and grandchildren's sporting, school and celebratory activities. Jerrie was a member of the United Church of Woodhull.

Her parents and one brother: Jack Lyle preceded her in death.

To send flowers to the family in memory of Geraldine Robinson, please visit our flower store.