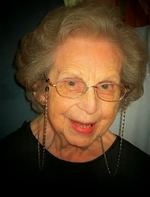 Geraldine M. Conway, 93, of Reynolds, Ill., died Friday, Oct. 3, 2014, at Unity Point Trinity in Rock Island, Ill. Mass of Christian Burial will be held at 11:30 a.m. on Friday, October 10, 2014, at St. Anthony's Catholic Church, Matherville, Ill. Burial will be in the St. Joseph's Catholic Cemetery, Preemption Township. The Visitation will be held Thursday, October 9, at the Fippinger Funeral Home, 401 S. College Ave, Aledo. The Rosary will be recited at 3:30 p.m. Visitation will follow from 4 to 7 p.m. Memorials may be made to St. Anthony's Catholic Church or St. Jude's Children's Hospital. Online condolences can be made at www.fippingerfuneralhome.com.

Geraldine was born September 3, 1921, in Rock Island, Ill., to John Andrew and Hildagarde Steinle Peterson. She attended Grant Grade School and Franklin Junior High. She graduated from Rock Island High School in 1939, which was the first graduating class from the then newly constructed high school building. She attended Rock Island Business College before beginning her career.

Geraldine and Thomas P. Conway of Reynolds, Ill., were married at St. Joseph's Catholic Church in Rock Island on February 16, 1946. They began their life together on the Thomas Conway family homestead, which is a Centennial farm.

Prior to her marriage, she was employed in the Bookkeeping departments of the Rock Island Bridge and Iron Works, Tru Vue, and for 3 years worked at Feltex, Inc., which was a war plant in Rock Island. From July 1962 to 1992 she was employed as Business Manager at the Mercer County Health Improvement Association, which sponsored Blue Cross/Blue Shield. She gave personal assistance to hundreds of members during her thirty year career to help them understand and optimize their healthcare insurance coverage.

Her memberships included the Mercer County Farm Bureau and St. Anthony's Catholic Church, where she was a member of the Altar and Rosary Society, the Blue Army, and taught Catechism. She enjoyed traveling, especially to So. California, and playing cards with the St. Anthony's Women's Card Club.

Gerri was a city girl from the West End of Rock Island who made the transition to farmer's wife. She was a devoted wife, mother, grandmother and great grandmother. Her devotion was most demonstrated when her husband, Tom, became ill and was hospitalized and in nursing homes since Sept. 26, 2012. She was with him virtually every day, regardless of the weather, because "He needs me." Her greatest treasure was the gift of her Catholic faith and entering the Church as an adult prior to her marriage. She was an inspiration to her family and friends for her faith, strength, and fortitude. Well-known for her sharp mind and memory, Gerri was a historian par excellance. Her favorite phrase when encountering a challenge was, "If I live to be 100!" Her family and friends were blessed with 93 years of her love and friendship.

Her parents and newborn son, Eugene Michael, preceded her in death.

Crucifix
Roman Catholic Church
The insignias listed here may be subject to copyright and / or trademarked. Those copyrights and trademarks are owned by the respective organizations.

To send flowers to the family in memory of Geraldine Conway, please visit our flower store.