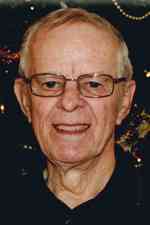 George Arnold "Bub" Roquet, 88, of New Windsor, Illinois died Friday, January 23, 2015 at Unity-Point Health in Rock Island. Services are 11:00 a.m. Tuesday, January 27, 2015 at the New Windsor Presbyterian Church. Burial is in the New Windsor Cemetery where graveside military rites will be conducted. Visitation is 4-7 p.m. Monday at the church. In lieu of flowers, a memorial fund will be established. Peterson-Wallin-Knox Funeral Home in Alpha is in charge of arrangements and online condolences can be made at www.petersonwallinknox.com.

Bub was born July 10, 1926 in New Windsor, Illinois to George and Bernice Bopp Roquet. He graduated from New Windsor High School. He enlisted in the U.S. Army/Air Force, having served in Guam during World War II. He married Marjorie J. Brooks May 15, 1949 in Milan, Illinois.

He was employed at his father's store in New Windsor, Roquet Produce and Feed. Bub was a substitute rural carrier for 17 years before being appointed postmaster in New Windsor, retiring on February 1, 1988 after serving 40 years of postal service.

He enjoyed taking care of his vehicles, woodworking with Dennis, listening to Big Band music, playing trumpet in the New Windsor band and spending time with his family.

He was preceded in death by his parents, one son, Bradley, one son-in-law, Curt Wilson, one sister, Vonda.

To send flowers to the family in memory of George Roquet, please visit our flower store.