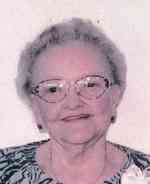 Genevieve A. McVeigh, 98, of Medesto, CA, formerly of Viola, IL died Monday, March 9, 2015 in Modesto. Private graveside services will be at a later date in the St. John's Catholic Cemetery in Viola. Fippinger Funeral Home in Aledo is in charge of arrangements and online condolences can be made at www.fippingerfuneralhome.com.

She was born in 1916 in Wausa, Nebraska. Her father was ordained from the Lutheran School of Theology and accepted the call to Woodhull, IL where he pastored the Swedish Augustana Lutheran Church. Genevieve began her schooling in Rock Island, Illinois and graduated from Woodhull High School in 1934. She moved to Chicago in 1935 where she graduated from the Augustana School of Infant Nursing. She was employed in the Chicago area for three years caring for newborn infants.

Her parents, husband, one son, Robert preceded her in death.

To send flowers to the family in memory of Genevieve McVeigh, please visit our flower store.