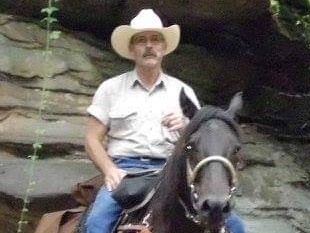 Gary “Doug” Lafever, 68, of Joy, Illinois passed away Friday, February 25, 2022 at his home.  Visitation is 5-7 p.m. Tuesday, March 1, 2022 at Fippinger Funeral Home in Aledo.  Services are 11:00 a.m. Wednesday, March 2, 2022 at Fippinger’s.  Burial is in the Buffalo Prairie Cemetery.   Memorial contributions may be left to the family and online condolences can be made at www.fippingerfuneralhome.com.

He was born January 2, 1954 in Aledo, Illinois to Lawrence "Scoop" and Mattie Fausett Lafever.  He graduated from Aledo High School in 1972. Doug married Sabine Ramlow March 21, 2019 in Aledo.

Doug was employed as a truck driver.

He was a member of the Trail of Hope Cowboy Church and enjoyed camping and his horses.

He was preceded in death by his parents and one brother, Steven Lafever.

To send flowers to the family in memory of Gary Lafever, please visit our flower store.
Open