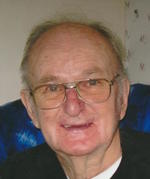 Fred W. Beard, age 81, of Aledo, Illinois died Friday January 9, 2015 at Genesis Senior Living in Aledo. Masonic Service will be 11:00 AM Saturday January 17, 2015 at the Fippinger Funeral Home in Aledo under the direction of the Aledo Masonic Lodge # 252 AF & AM. Funeral services and military rites will follow by the Reverend Mark Harris and the Mercer County VFW Post 1571. Private burial will be in the Candor Cemetery, rural Seaton, IL at a later date. Visitation is one hour prior to masonic services at Fippingers where memorials may be left to the Order of the Eastern Star Chapter # 126 or the Parkinson's Research Foundation. Online condolences can be made at www.fippingerfuneralhome.com.
Fred was born November 10, 1933 in New Boston, IL to Fred A. and Mable V. Sloan Beard. He graduated from Aledo High School in 1951 and worked at the Shale City Brickyard until enlisting in the U.S. Army serving in the Korean Conflict from 1951 to 1953.
He married Jane Roseboom to whom he had two daughters and later married Joanne Jones Reed June 23, 1985 in Aledo.
He briefly worked at the Rock Island Arsenal until becoming employed at the U. S. Postal Service where he worked for 38 years, retiring in 1998. After retiring, he briefly worked for Hahn in Muscatine and spent a great deal of time working on his farm.
Fred was baptized at St. John's Episcopal Church in Preemption, IL and was a member of the Aledo Masonic Lodge # 252 AF & AM and the OES Chapter # 126 in Aledo where he served as past patron.
He was an avid Cubs fan and he loved his farm and hard work.
Survivors include his wife, Joanne, 2 daughters, Shari Gowdy of Orion, IL, Cindee (Frank) Huffer of Moline, IL, 4 grandchildren, 9 great grandchildren, 3 sisters, Mildred Harmsen of DeWitt, IA, Betty Swanson of Milan, IL, Martha Wenzel of Monticello, IL and several nieces and nephews.
His parents, 1 infant son and 3 sisters preceded him in death.

To send flowers to the family in memory of Fred Beard, please visit our flower store.