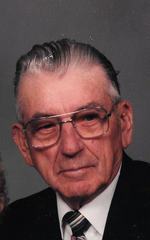 Francis L. "Frank" Claeys age 103 of Aledo, IL, formerly of Preemption, IL, died Sunday December 27, 2015 in his home. Services are 11:30 AM Wednesday December 30, 2015 at the Fippinger Funeral Home in Aledo. Burial is in the Preemption Cemetery. Visitation is from 10:00 AM until time of services Wednesday at Fippingers where memorials may be left to the Antique Engine and Tractor Association of Geneseo, IL. On-line condolences can be made at www.fippingerfuneralhome.com.

He was born December 21, 1912 in Bureau County, IL, a son of Edward and Louise Roets Claeys. He received his education from the Ringle School near Hooppole, IL. On February 8, 1935 he was united in marriage to Correne David in East Moline, IL. She died January 4, 2007

Frank was employed at International Harvester Farmall Works in Rock Island as an assembler and repairman for 36 years retiring in 1972. His memberships include the Antique Engine and Tractor Association where he served as former president, International Harvester's Collectors Club Chapter # 10 and the Fall Creek Rangers Club. He enjoyed making miniature running gas engines and wintering in Arizona and Texas.

He was preceded in death by his parents, wife, 3 sisters and 2 brothers.

To send flowers to the family in memory of Francis Claeys, please visit our flower store.