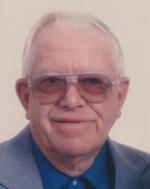 Floyd E. Salmon, 88, of Aledo died Sunday, July 19, 2015 at Genesis Senior Living Center in Aledo. Sevices are 10 a.m. Thursday, July 23, 2015 at Fippinger Funeral Home in Aledo. Burial is in the Aledo Cemetery where graveside military services will be conducted. Visitation is from 5-7 p.m. Wednesday at Fippinger's where memorials may be left to the Sunbeam United Presbyterian Church or Brookstone of Aledo. Online condolences can be made at www.fippingerfuneralhome.com.

Floyd was a U.S. Army Veteran serving in the 150th MP Division. He farmed before working at John Deere in Moline. He was then employed as a machinist with Fairbanks/Morris in Beloit Wisconsin until returning to Aledo where he worked for the Case Co. in Rock Island until its closing. He retired from the Roth Pump Company in Milan in 1992.

He was a member of the Sunbeam United Presbyterian Church, the American Legion Fallerans Post 121 in Aledo and the Moose Lodge. He enjoyed bowling for many years and golfing.

His parents, wife, 1 grandson, 1 sister and 7 brothers preceded him in death.


American Legion
Army
Army
John Deere
Military Police
Moose Lodge
Presbyterian Church USA
The insignias listed here may be subject to copyright and / or trademarked. Those copyrights and trademarks are owned by the respective organizations.

To send flowers to the family in memory of Floyd Salmon, please visit our flower store.