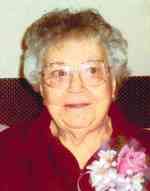 Evelyn A. Shaw, 96, of Aledo, IL, formerly of Joy, IL, died Sunday, August 4, 2013 at Genesis Senior Living Center in Aledo. Services are 1 p.m., Friday, August 9, 2013 at Fippinger Funeral Home in Aledo. Burial is in the Greenmound Cemetery. Visitation is 11 a.m. until the time of service at Fippinger's where memorials may be left to the Genesis Senior Living Center or Keithsburg First Christian Church. Online condolences can be made at www.fippingerfuneralhome.com.

Evelyn was a homemaker her entire life and a bookkeeper for her husband's business. She was baptized in the Baptist Church in Falls City, Nebraska. She was a member of the VFW Auxiliary Post 3781 and Order of the Eastern Star in Mammoth Spring, Arkansas and a former member of the Rebekah Lodge in Keithsburg. Evelyn enjoyed hand embroidery, quilting, canning, traveling and her family.

She was preceded in death by her parents; husband; two sons: Robert and James; three sisters; and two brothers.

To send flowers to the family in memory of Evelyn Shaw, please visit our flower store.