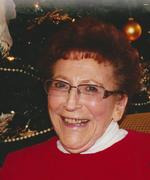 Evelyn M. Artcher Brown, age 87 of Aledo, Illinois died Wednesday, January 14, 2015 at the Genesis Medical Center in Aledo. Services are 2:00 PM Monday January 19, 2015 at Fippinger Funeral Home In Aledo. Burial is in the Aledo Cemetery. Visitation is from 2 - 5 PM Sunday at Fippingers where the Mercer County VFW Post 1571 Auxiliary will have a service at 5:00 PM. Memorials may be left to the Aledo United Methodist Church, Mercer County VFW Post 1571 or the Aledo Park District.

Evelyn worked at the Illinois Power Company and the Pony Journal both in Aledo. She was then employed at the Mercer County Clerk and Recorders Office, retiring in 1992.

Her memberships include the Aledo United Methodist Church and the Mercer County VFW Post 1571 Auxiliary. She enjoyed gardening , watching spectator sports and attending her children's and grandchildren's events. She was an avid football, baseball and Chicago Cubs fan.

Her parents, husbands, 3 sisters Ruth, Mildred, and Vera and 1 brother Martin preceded her in death.

To send flowers to the family in memory of Evelyn Brown, please visit our flower store.