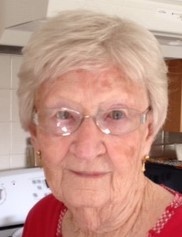 Ethel M. Scranton, 92 of Alpha, IL died Thursday, June 13, 2019 in her home. A visitation for Ethel will be from noon to 2:00 p.m. Saturday June 15, 2019 at Peterson Wallin Knox Funeral Home in Alpha. Private graveside services will follow in the New Windsor Cemetery. Memorials may be left to the New Windsor Cemetery Association and online condolences can be made at www.petersonwallinknox.com.

Ethel was a homemaker and of the Presbyterian faith.

She enjoyed bowling, square dancing, playing in various card clubs and living in the country.

Her parents; two husbands; one grandson: Todd; one step-daughter: Kathy; two brothers preceded her in death.

To send flowers to the family in memory of Ethel Scranton, please visit our flower store.
Open