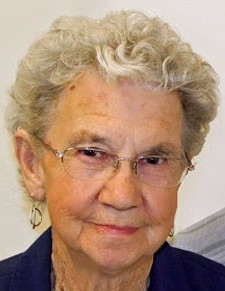 Elnora A. Cowser, of Woodhull, IL, completed a wonderfully blessed 96 years on earth to enter her heavenly home at 12:02 PM Thursday, March 3, 2022 at OSF St. Mary’s Medical Center in Galesburg.  Funeral services are 11:00 a.m. Monday, March 7, 2022 at the United Church of Woodhull.  Burial is in the Woodhull Cemetery.  Visitation is 10 a.m. until the time of services at the church where memorials may be left to the United Church of Woodhull or Meals on Wheels.  Peterson Wallin Knox Funeral Home is in charge of arrangements and online condolences can be made at petersonwallinknox.com.

Elnora was born January 11, 1926 in New Windsor, IL to Victor and Anna Peterson Carlson.   She graduated Salutatorian from the New Windsor High School and married Olin U. Cowser December 29, 1944 in Keytesville, MO.

She was a member of the United Church of Woodhull and enjoyed serving in the church and throughout the community. In her younger years, she enjoyed camping with the girl scouts and channeling boy scouts into doing projects.   She was always lovingly involved with her family and enjoyed attending athletic events of her children, grandchildren and great grandchildren.  She could quilt, garden and make the best strawberry jam and noodles.

There aren’t enough words to relate how dear she is to those she has left behind including her husband of 76 years, Olin; one daughter, Barbara (Bill) Callanan of Kennebunk, Maine; three sons, Daniel (Kathleen) Cowser of Louden, TN; Jim (Vanya) Cowser of Alpha, IL; Larry Cowser of Woodhull, IL; 8 grandchildren; Aletia, Ryan, Joshua, Deja, Bree, Kendra, Kassi, and Michael, 12 great grandchildren; several nieces and nephews.

Elnora was preceded in death by her parents; three sisters, Margaret, Alverna, Ethel and one brother, John.

To send flowers to the family in memory of Elnora Cowser, please visit our flower store.
Open