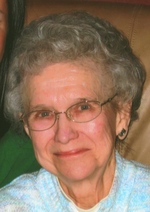 Eileen L. Johnson, 90, of Rio, IL, died Wednesday, December 3, 2014 at Seminary Manor in Galesburg. Services are 11 a.m. Tuesday, December 9, 2014 at the Rio Presbyterian Church. Burial is in the Oaklawn Memorial Gardens in Galesburg. Visitation is 5-7 p.m. Monday at Peterson-Wallin-Knox Funeral Home in Alpha where memorials may be left to the Rio Presbyterian Church or Tri-County Ambulance. Online condolences can be made at www.petersonwallinknox.com.

She was born March 4, 1924 in New Windsor, IL to Lawrence and Ruth Pearson Livingston. She graduated from Oxford Township High School in 1942. She was a bookkeeper at Bugos-White Mines prior to her marriage to Dale L. Johnson on June 30, 1946 in Alpha. He died April 15, 2006.

She was a homemaker and assisted her husband in the operation of the family farm.

Eileen was a member of the Rio Presbyterian Church, Rio Women's Club and the Rio friendship/card club.

She enjoyed baking, cooking, reading and being with her family, including her grandchildren and great grandchildren.

She was preceded in death by her parents; husband; one brother, Rex Livingston; one sister, June Olson; and one son-in-law, Bill Harding.


Presbyterian Church
The insignias listed here may be subject to copyright and / or trademarked. Those copyrights and trademarks are owned by the respective organizations.

To send flowers to the family in memory of Eileen Johnson, please visit our flower store.