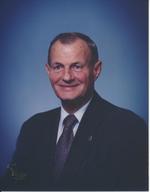 Edward W. "Pike" O'Dell, 84, of Moline, IL, died Tuesday, June 2, 2015 at Genesis West in Davenport, Iowa. Services are 11:30 a.m. Friday, June 5, 2015 at Fippinger Funeral Home in Aledo. Burial is in the New Boston Cemetery. Visitation is 10 a.m. until time of services at Fippinger's where memorials may be left to the Alzheimer's Association or the Wounded Warrior Project. Online condolences can be made at www.fippingerfuneralhome.com.

He was born February 9, 1931 in Rock Island, Illinois. He was raised by Hartzell and Esther Imber O'Dell. Pike graduated from New Boston High School and enlisted into the U.S. Navy, serving in the Korean War. He was at sea on the minesweeper U.S.S. Peregrine for two years. Pike graduated from Store Keepers School in Bayonne, NJ, served on the Rhine River Patrol in Germany for two years and received the sharpshooter medal.

Pike was employed as a salesman for the former Stevenson Sales in Davenport, Iowa for 25 years and later employed by Chart Automotive Group for 16 years. He drove shuttle for Lindquist Ford.

He was preceded in death by his parents, an infant sister, Sylvia, and sister, Shirley Baird and son, Shawn O'Dell.

To send flowers to the family in memory of Edward O'Dell, please visit our flower store.