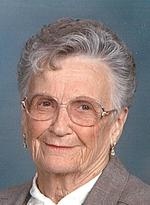 Edna B. Rhine, age 91, of Aledo died Thursday, June 7, 2012 at home. Services are 10 a.m., Wednesday, June 13, 2012 at the Fippinger Funeral Home in Aledo. Burial is in the Aledo Cemetery. Visitation is 4-7 p.m., Tuesday, June 12, 2012 at Fippingers where the Mercer County VFW Post 1571 Auxiliary will conduct a service at 7 p.m. Memorials may be left to the Mercer County VFW Post #1571 Auxiliary or the Aledo First Baptist Church. On-line condolences can be made at www.fippingerfunealhome.com.

She was preceded in death by her parents; her husband, Lester; a son and daughter-in-law: Pete and Linda Chard; 2 brothers and 1 sister.

To send flowers to the family in memory of Edna Rhine, please visit our flower store.