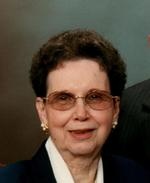 Dorothy W. Brown, 86, of Woodhull, Illinois, died Tuesday, October 29, 2013, at Heartland Health Care Center in Galesburg. Services are 11:30 a.m., Saturday, November 2, 2013, at the United Church of Woodhull. Burial will be in the Woodhull Cemetery. Visitation is 5-8 p.m. Friday at the Peterson-Wallin-Knox Funeral Home in Woodhull. Memorials may be made to the Tri-County Ambulance Service or the Woodhull Cemetery Association. Online condolences can be made at www.petersonwallinknox.com.

Dorothy was born December 26, 1926, in North Henderson, Illinois, a daughter of Frank and Ada (Swanson) Nelson. She graduated from Woodhull High School in 1945. She married her high school sweetheart, Merrill E. Brown of Woodhull, on March 23, 1946, in Newport, R.I., where he was stationed with the U.S. Navy. They celebrated their 60th wedding anniversary in 2006, and Merrill preceded her in death December 25, 2007. She took
great pride in the fact that her wedding band never left her finger after the day they were married.

After about a dozen years as a stay-at-home mom, she re-entered the workforce and became well-known around her small hometown by working as a waitress and then the manager of two of the community's restaurants, a job she continued for about 20 years. She retired after a period of time in which she managed the town's drug store with help from her husband.

She was a woman of many varied interests in her later years, watching everything from professional golf and the Chicago Cubs to "Seinfeld" reruns and the Bill Gaither "Classic Gospel" show on TV after a chance meeting with some of the program's performers. She was an exceptional cook who kept her recipes "in her head," and her family especially looked forward to the big meals she cooked for Sunday dinner and holidays such as Thanksgiving and Christmas.

Her memberships included the former Clover Chapel Church, where she served as treasurer, and the church's Ladies Aid group. She especially enjoyed socializing with friends, including a monthly card group, and with her brothers- and sister-in-laws over cards as well. She had a fine singing voice as a young woman, and she and Merrill loved to go dancing on Saturday nights.

Survivors include two sons, Craig Brown and his wife, Connie Lannan, of Geneseo, Ill., and Lindsey Brown and his wife, Shanie, of Woodhull; four grandchildren, Sara Brown of Arlington Heights, Ill., Emily Getz and her husband, Ben, of Morton, Ill., and Anthoney and Keegan Brown, both of Woodhull; and numerous nieces and nephews. She was especially proud of her grandchildren and their accomplishments.

She was preceded in death by her parents; her husband; her daughter-in-law, Patricia Brown; her brothers, Harold "Butch", Dale and Karl; and her sisters, Gertrude Roberts and Marian Lindsey.

Her family would especially like to thank the incredibly kind and caring nurses and staff at Heartland Health Care Center, Tri-County Ambulance, Hospice Compassus, Cottage Hospital and St. Mary's Medical Center as well as the home care workers from the Henry County Health Department who looked after Dorothy in her final months, allowing her to spend much of her final year at home.

To send flowers to the family in memory of Dorothy Brown, please visit our flower store.