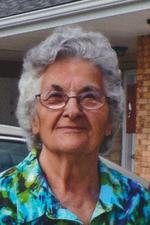 Doris L. Millett, 85, of Aledo, IL died Sunday, January 3, 2016 at Brookstone in Aledo. Services are 11:30 a.m. Wednesday, January 6, 2016 at Fippinger Funeral home in Aledo. Burial is in the Aledo Cemetery. Visitation is 10:00 a.m. until the time of services at Fippinger's where memorials may be left to the American Cancer Society's Relay for Life. Online condolences can be made at www.fippingerfuneralhome.com.

Doris was employed at Brown Lynch Scott in Aledo. Following the death of her husband, she graduated from Franciscan School of Nursing in 1974. She was employed as a Nurse for Mercer County Hospital for 17 years, retiring in 1992. She was a registered Massage Therapist working out of her home for over 15 years.

She loved being outdoors and flower gardening.

She was preceded in death by her parents, husband, a sister, Shirley Holton and two brothers, Jim and Kenneth.

To send flowers to the family in memory of Doris Millett, please visit our flower store.