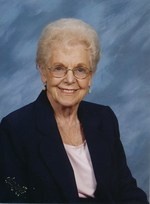 Doreen M. Bailey, 90, of Aledo, IL, formerly of Viola, IL and Fairfield, IA died Wednesday, August 26, 2015 at Genesis Senior Living in Aledo. Cremation has been accorded. A celebration of life will be at 6 p.m. Friday, September 4, 2015 at Fippinger Funeral Home in Aledo. A private burial will be held Saturday, September 5, 2015 at Memorial Lawn Cemetery in Fairfield. Memorials may be left to the Aledo United Methodist Church or Children's Miracle Network. Online condolences can be made at www.fippingerfuneralhome.com.

She was born September 5, 1924 in Jefferson County, IA to Roy and Anna Nelson Jacobs. She graduated from Lockridge High School in Iowa and married Theo L. Bailey October 27, 1943 in Camden, NJ. He died January 7, 1994.

She was employed as a bookkeeper for Thermo Gas Company of Fairfield retiring in 1985. She moved to Viola in 1999 and Brookstone in Aledo in 2007.

Doreen was a member of Walton Golf Club in Fairfield and former Treasurer of the Methodist Women in Viola.

She enjoyed sewing and camping.

She was preceded in death by her parents, husband, 2 sisters, Etheline Vorhies and Lois Harrison and 1 nephew, Michael Harrison.

To send flowers to the family in memory of Doreen Bailey, please visit our flower store.