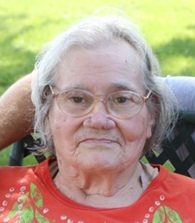 Donna M. Gillespie Moody, 83, of Aledo, IL died Thursday, January 12, 2017 at Unity-Point Health Trinity in Rock Island.  Cremation has been accorded and there are no services.  Private burial will be at a later date. Friends may greet the family 12-2 p.m. Sunday, January 15, 2017 at The Depot in Aledo.  Memorials in her name may be sent to the Mercer County Food Pantry.  Fippinger Funeral Home in Aledo is in charge of arrangements and online condolences can be made at www.fippingerfuneralhome.com.

Donna was a homemaker.  She enjoyed gardening, camping, traveling and fishing.

Donna was preceded in death by her parents, husbands, one brother and one sister.

To send flowers to the family in memory of Donna Moody, please visit our flower store.