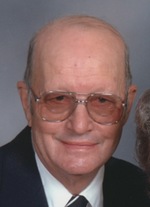 Donald J. Hanson, 84, of Alpha, IL, died Friday, December 12, 2014 at Knox County Nursing Home in Knoxville. Mass of Christian Burial is 11:00 a.m., Tuesday, December 16, 2014 at St. John's Catholic Church in Woodhull. Burial is in the Greenview Memorial Gardens in Silvis where military services will be conducted. Visitation is 5-7 p.m. Monday at Peterson-Wallin-Knox Funeral Home in Alpha where a rosary will be recited at 7:30 p.m. A memorial fund will be established. Online condolences can be made at www.petersonwallinknox.com.

He was born January 11, 1930 in Canby, MN to Russell and Leona Winkels Hanson. He attended the local schools and briefly farmed with his father in Minnesota. Donald moved to Garden Plaines December 19, 1949 and became a truck driver with Volkman in Fulton until 1952. He enlisted in the United States Army, served in Korea as a corporal with the 609th Field Artillery Battalion from 1952-1954 and received the soldier of the month award.

He worked two jobs while raising his family, farming on the side. He was employed as a layout inspector for JI Case in Rock Island and was the last person to walk out the door when JI Case closed its doors in 1988. He had been employed there for thirty years. Donald and his family moved to Alpha in 1974 where he was employed at the Alpha Ready Mix and the Galva Foundry before driving a school bus for the AlWood School District #225 for 8 years.

He was a member of St. John's Catholic Church, having been involved in Cursillo and was an active member of the Miles S. Sturgeon American Legion Post 546 in Woodhull from 1996-2012. He was a former vice president of the Alpha Food Pantry, member and silver leader of the Disabled American Veterans and adjutant 10 years for American Legion.

Donald enjoyed riding with his wife on their Harley Davidson for 28 years. He enjoyed dancing, was a very good jitterbug dancer and was a member of the Cast-A-Ways Square Dancing Club in Port Byron, Illinois.

He was preceded in death by his parents; his brother, Paul; and his sister, Diane.

To send flowers to the family in memory of Donald Hanson, please visit our flower store.