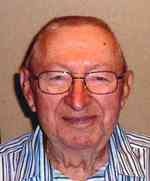 Donald E. "Elmo" Diehl, 81, of Aledo, Illinois, died Sunday, February 15, 2015, at Unity Point Health in Rock Island. Services are 10:30 a.m. Thursday, February 19, 2015, at Fippinger Funeral Home in Aledo. Burial is in the Hamlet Cemetery where graveside military services will be conducted. Visitation is 4-7 p.m. Wednesday at Fippinger's where memorials may be left to the Hamlet Cemetery Association or Hamlet-Perryton Presbyterian Church. Online condolences may be made at www.fippingerfuneralhome.com.

Elmo was born August 6, 1933, in Mannon, Illinois, to George and Mary Welch Diehl. He attended Mannon and Perryton schools. Elmo served in the U.S. Army from 1953 until he was honorably discharged in 1955. On September 23, 1955, Elmo was united in marriage to Ella Marie Wiggins in Hamlet, Illinois.

He was employed as a mechanic at Henderson Ford Sales in Aledo for 43 years, retiring in 1999.

Elmo was a member of the Hamlet-Perryton Presbyterian Church. He enjoyed playing church league softball and was a die-hard Cubs fan. Elmo also enjoyed repairing and collecting clocks.

He was preceded in death by his parents; three sisters and five brothers.


Army
Army
Presbyterian Church
The insignias listed here may be subject to copyright and / or trademarked. Those copyrights and trademarks are owned by the respective organizations.

To send flowers to the family in memory of Donald Diehl, please visit our flower store.