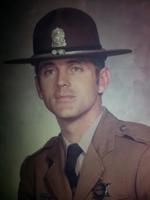 Donald E. "Gene" Dennison, 68, of St. Petersburg, FL, formerly of Bradford and Keithsburg, IL, died Sunday, July 12, 2015 at C.W Bill Young VA Medical Center in Bay Pines, FL. Cremation has been accorded. Private graveside military services and burial is in the Rock Island National Cemetery, Arsenal Island. Visitation is 4-7 p.m. Tuesday, July 28, 2015 at Fippinger Funeral Home in Aledo, IL where Masonic Rites will be conducted at 7 p.m. Memorials may be left to St. Jude's Children's Hospital and online condolences can be made at www.fippingerfuneralhome.com.

He was employed as an Illinois state trooper, assigned to the Macomb district and primarily worked in Henderson, Mercer and Warren Counties. Upon his retirement, he moved to Florida. He enjoyed boating on the Mississippi River, playing cards, singing Willie Nelson songs and karaoke and activities at the American Legion.

He was a member of the Bradford Masonic Lodge.


Masonic Lodge
National Defense Service Medal
US Navy
Vietnam Service Medal
The insignias listed here may be subject to copyright and / or trademarked. Those copyrights and trademarks are owned by the respective organizations.

To send flowers to the family in memory of Donald Dennison, please visit our flower store.