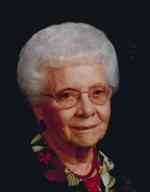 Dona M. Baker-Brokaw, 91, of Aledo, died Saturday, October 12, 2013 at Genesis Senior Living Center in Aledo. Services will be at 11:30 a.m., Saturday, October 19, 2013 at Trinity Presbyterian Church in Aledo. Burial will be in the Aledo Cemetery. Visitation is 10 a.m. until the time of service at the church. Memorials may be left to Trinity Presbyterian Church. Fippinger Funeral Home in Aledo is in charge of arrangements. Online condolences may be made at www.fippingerfuneralhome.com.

Dona was a homemaker and assisted her husband on the family farm.

She was a member of Trinity Presbyterian Church, having taught Sunday School for many years and participated in the Bible Bunch, an after school ministry program. She was also a member of the Illinois Farm Bureau Women's Committee, having served as chairman from 1975-1978.

She enjoyed sewing, golfing, dancing, boating, cooking, baking and especially enjoyed her family. She was an avid Cubs fan.

She was preceded in death by her parents; husbands; 5 sisters; and 2 brothers.


Farm Bureau
Presbyterian Church USA
The insignias listed here may be subject to copyright and / or trademarked. Those copyrights and trademarks are owned by the respective organizations.

To send flowers to the family in memory of Dona Baker-Brokaw, please visit our flower store.